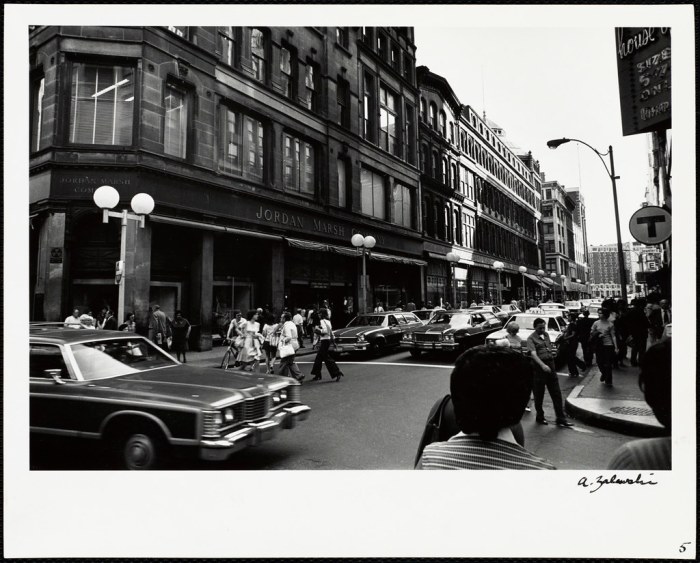 Some years ago, while researching Fallout Shelters, I came across a book that listed a history/annual report of the Roxbury section of Boston, which includes the Longwood Medical Area and Mission Hill. Unfortunately, the book was for library use only and now it is no longer available.

Within the book, there were several lists for Roxbury residents of local resources, including fire stations, police stations, and TV stations.

The book also included a list of approved Fallout Shelters in Roxbury. Many of these buildings still exist, but many have had their signs removed. Some buildings were demolished for redevelopment, and others rehabbed for the same reason (for example, the old Ferdinand Furniture building in Dudley Square).

As well, the Boston Normal School on Huntington Avenue in Boston (one of the first posts on this site, and now part of the Mass College of Art) is listed on the sheet under its former designation, The State Teacher’s College, and has a listed capacity on the sheet of 1272. However, the sign itself, when it was revealed on the building, had a posted capacity of 923. No other building in the area was listed on the sheet with a 923 capacity, so likely the capacity numbers on the sheets were incorrect.

Anyways, the sheets are below. Any questions on building designations or further information available, contact me.

The documents above were copied with permission from an unnamed book at the Boston Public Library reference section, main library, Copley Square. The PDFs are property of Fallout Five Zero.

Starting in the early 1950’s, Boston once had an extensive air raid siren system. The Greater Boston Civil Defense Manual, published in 1952, stated Boston had 119 air raid sirens. In 1965, that number was at 132.

The above mentioned civil defense manual also stated that each siren could be operated individually, or from a central location, and all were tested on Fridays at noon.

The above pictures show the controls for one such siren. These were located at Boston Fire Department’s Engine 51 station in Oak Square, Brighton in the patrol desk area. These were taken in September 2009 (hence the quality, see below). However, the station underwent major renovations in or around 2011, and the controls (as well as the exterior Fallout Shelter sign) were removed.

The last known siren in the city came down in 2000, when the old Registry of Motor Vehicles building at 100 Nashua Street was demolished. Prior to that, many sirens had been removed when buildings were renovated in the 1980’s. It is unknown when the city stopped using or maintaining the sirens, although historical accounts have it somewhere around the early to mid 1970’s.

Editors note: These pictures were taken using the then technologically advanced, but now not so much iPhone 3G. Apologies for the very poor quality.

Fallout Five Zero received some mail today from visitor Kris Waterman, who recollected the status of some Civil Defense supplies at two Boston shelters: the German International School in Allston, and Boston Latin School near the Fenway:

I know what happened to the supplies in the shelters in two of the locations in your list:

1) The German International School in Allston was [originally] named St Anthony’s – I attended school there. My 5th & 6th grade teacher asked the janitor what happened to the supplies and he told her that they were still in place until the previous summer when they were thrown out (Summer of 1984? 1985? – sorry my memory is a little hazy on the year).

2) Boston Latin School – the water barrels actually [became] trash cans located in various classrooms throughout the school. Not sure if there were crackers or carb supplements stored at any point in  there. (1980s’)

What is interesting is that there have been similar situations where Civil Defense water barrels became trash cans for various reasons, but this is the first case where I have heard of it happening locally.

At least someone actually used them for other purposes, unlike the MBTA, who dumped all the ones at Boylston Station at the end of the tunnel.

Thanks to Kris Waterman for sharing this information.

A woman strolls by as three men sit outside the former Army & Navy YMCA in Charlestown in this undated photo. A Fallout Shelter sign is posted on the wall to the right of the entrance. This building and it’s neighbors have since been demolished.

The above photograph is property of the City of Boston Archives and used under Creative Commons licensing. No portion of this photograph was changed or altered in any way.

As found on Archive.Org, several Community Shelter Plans existed for Massachusetts going into the late 1970’s.

The following links are for scanned copies of Community Shelter Plans for various counties in Massachusetts.

As I looked through some of them, I noticed that there are public shelters listed in some places that once had posted signs, and several others that were not believed to have ever had signs. That makes me wonder if, by the 1970’s, that officials wanted to let the public know which buildings might have been suitable as shelter, but did not make the effort to mark them with signs, or could not allocate signs to put on them. The lists also did not include all known shelters in an area, especially in larger cities and towns (i.e. Boston).

You might also notice that the maps with the shelter plans contain the disclaimer that these shelters were only for people whose basements were not suitable as shelters, and as well that not all shelters were stocked with food, and to bring whatever you could carry with you to the shelter.

An interesting read for anyone that lived in Massachusetts during this time, and maybe even remembers these documents being published or distributed.

As the fallout shelter program took off nationwide, Boston’s Civil Defense Department was well involved, and as seen in documents published on the documents page, was marking, licensing, and stocking shelters all over the city.

Here are some numbers and facts about the program found in annual Civil Defense Department reports:

As well, by the end of 1964, MBTA tunnels in the city had been stocked with enough food and supplies for 70,000 people.

In one year, it seems the program had slowed a bit. The end of 1965 saw 1,153 shelters marked and licensed, an increase of only 6 shelters from the previous year.  512 of the shelters had been stocked with supplies.

On May 11, 1965, two 200 bed emergency hospitals were established; one at Maverick Station in East Boston and one at Broadway Station in South Boston.

On July 7, 1965, 350 tons of food and medical equipment were stored at Andrew Station in South Boston for use in downtown department stores, to care for a total of 74,000 people. (It is unknown if these items still exist, or where in the station they were stored).

As for the air raid siren system, a document from the Boston Civil Defense Department, dated November 29, 1965,  which was written to answer a questionnaire regarding Boston’s air raid warning capabilities, stated that 132 air raid sirens existed in the city at that time.

The last of the sirens came down in 2000 when the old Registry of Motor Vehicles building at 100 Nashua Street in Boston (also a fallout shelter) was demolished.

The list I have provided on this site only has, as of this writing,  just over 400 fallout shelter locations in the city (including many demolished buildings), so it is remarkable, at least to me, that some 700 more existed. Hopefully time, effort, and tips will reveal the rest.