After the National Shelter Survey began in 1961, and locations were identified that were thought to provide appropriate fallout protection, Fallout Shelter signs were placed on the exterior and most times, the interior of these locations.

However, as time went on and the program fell out of favor, signs were removed as buildings were renovated or for other reasons (vandalism, stolen etc); in some cases, buildings were demolished outright and the signs went with them.

Photographic research suggests many buildings kept their signs throughout the 1980’s and into the mid 1990’s; it was then that signs started to be removed more frequently. As seen on this site, many signs remain on buildings to this day, but not to the extent that they did then.

As signs were removed, shadows and evidence of their existence would sometimes remain on walls. In some cases, good mason and repair work would remove marks, but this was not always true and some walls retained these shadows regardless.

A sign shadow for a Fallout Shelter sign can generally be identified in a few different forms. For exterior signs, if adhesive was used, four or five prominent dots of leftover adhesive are seen on an exterior wall in a square pattern. Other times, a square pattern of different colored bricks are seen near an entrance door; this was due to the sign covering the bricks and inhibiting weathering of the bricks and mortar. In cases where a sign was affixed with nails recently removed, a dirty or dusty square may be seen.

Below are some examples of exterior sign shadows as seen on buildings in the Boston area. 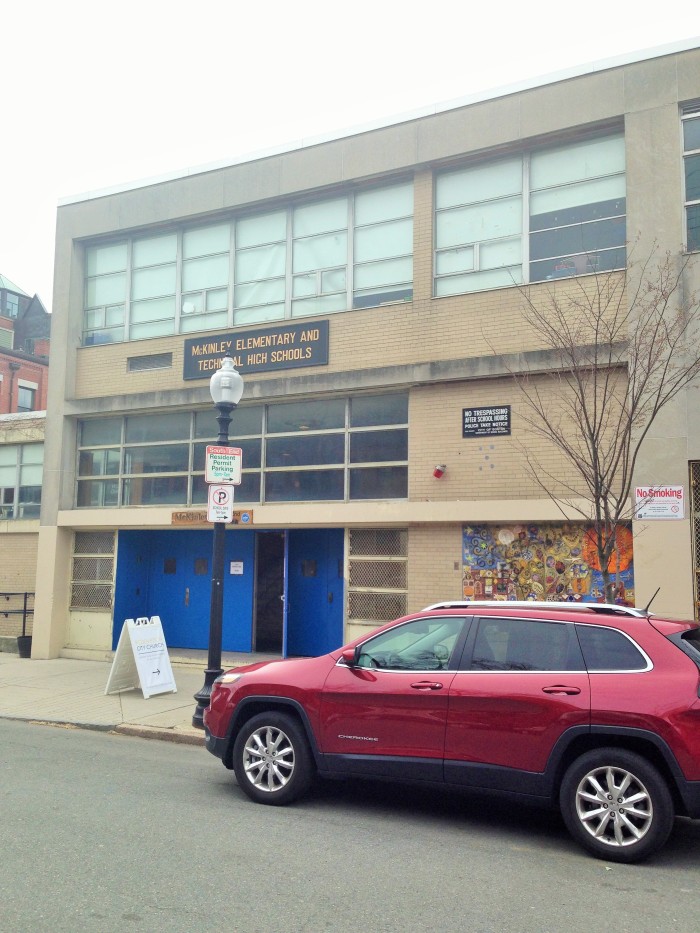 The exterior of the McKinley School has an adhesive shadow on the upper wall to the right of the front door. It is unknown when this sign was removed. 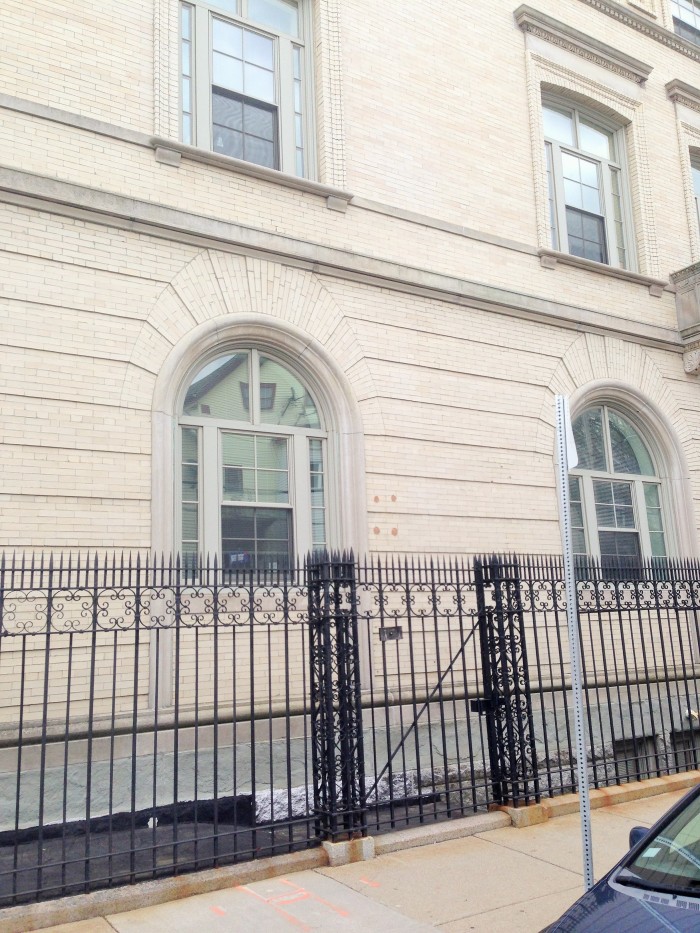 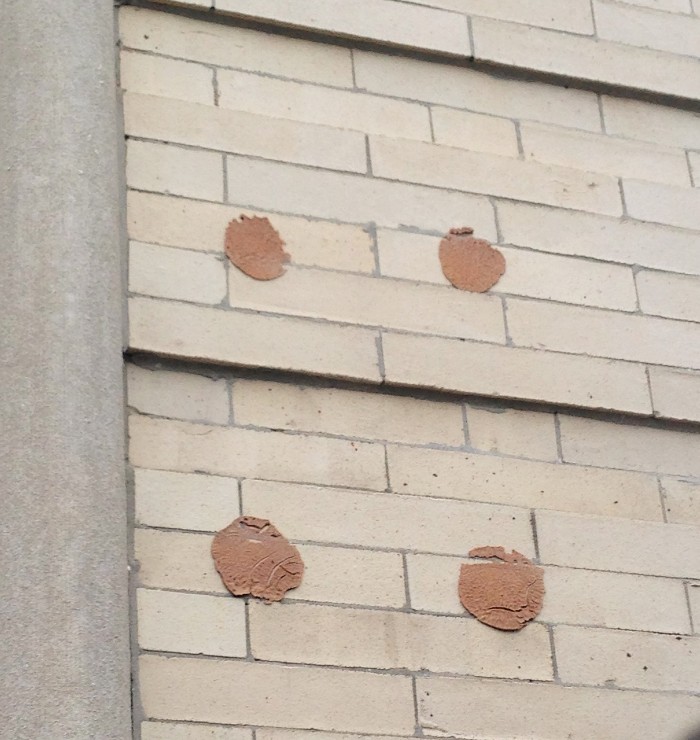 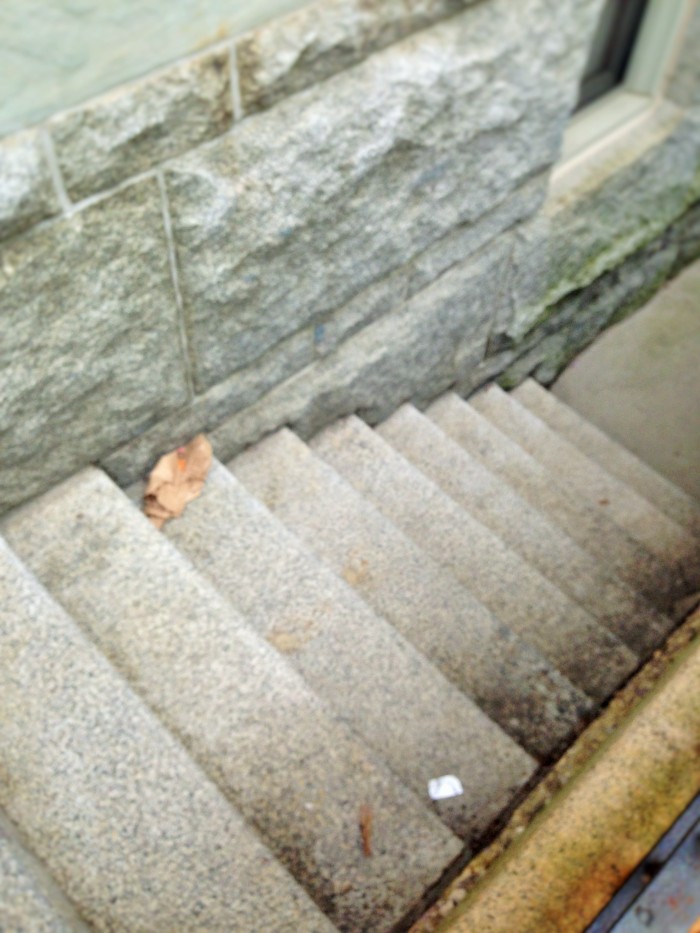 At the former Joseph Barnes School in East Boston, which is now residences, adhesive marks are shown on a wall on the Princeton Street side of the building. These marks are over a set of stairs leading to a basement door. 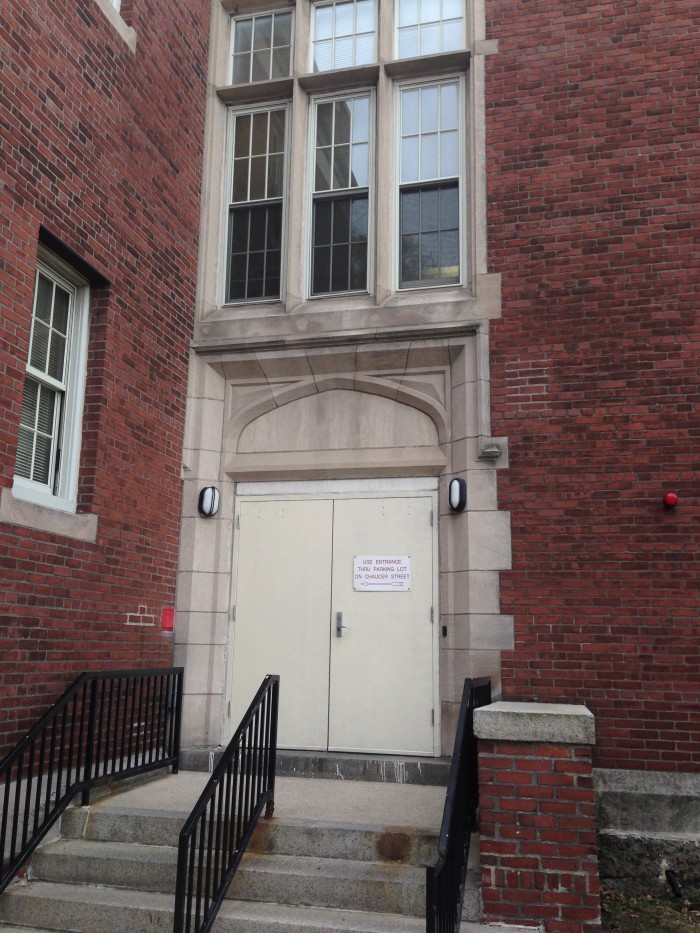 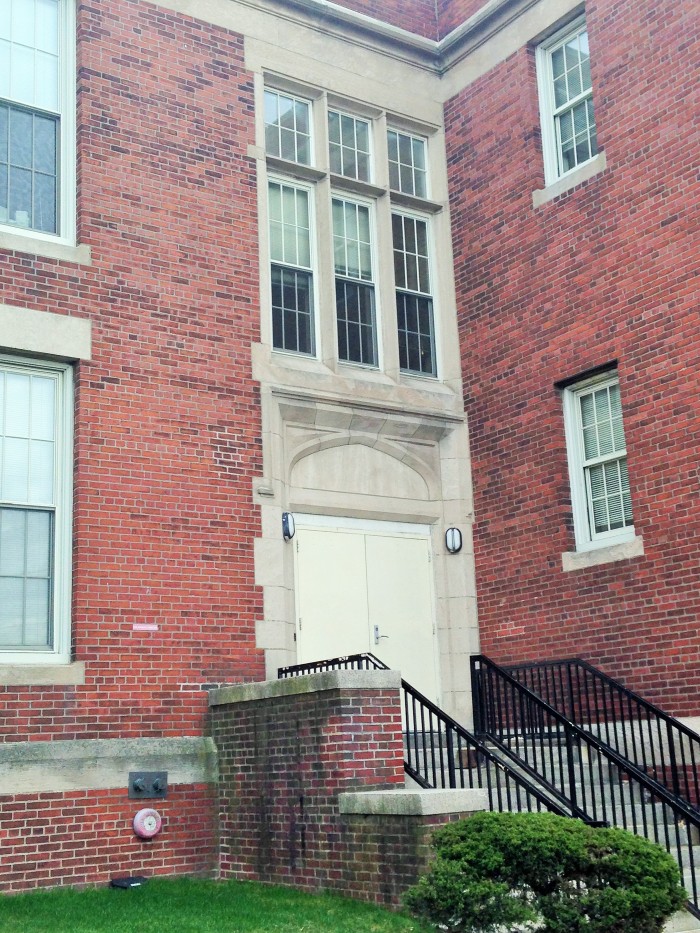 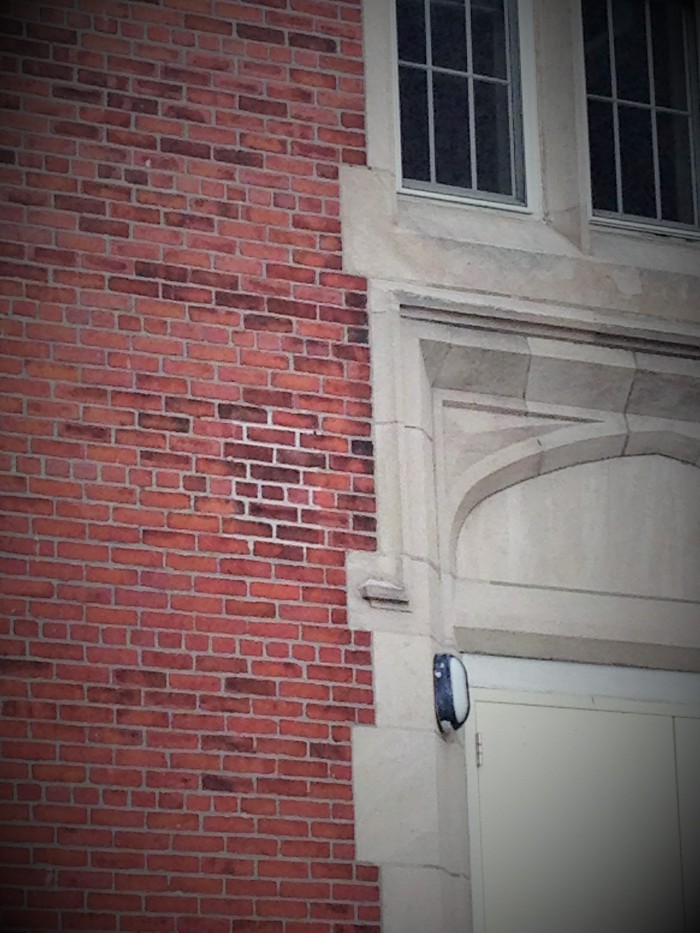 At the former Bishop Cheverus School in East Boston (now the Cheverus School Apartments), shadows are seen next to many of the rear exit doors facing Moore Street. In this case, the signs were nailed up, and no adhesive was used. The shadows are seen in the form of darker bricks and whiter mortar to the right and left of the doors. (The doors in the first two pictures were less than 10 feet from each other, but both had their own signs). 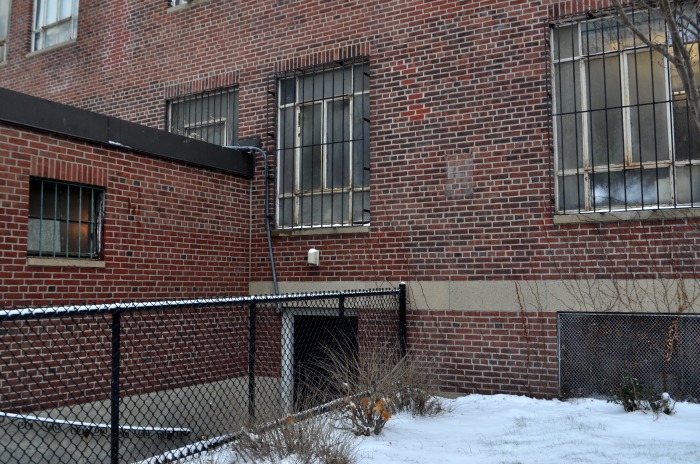 Although Fallout Shelter signs are still up at many of the buildings of the Bunker Hill Housing Project in Charlestown, the sign on the side of the Administration Building, which faces Bunker Hill Street, was removed around 2010. This dusty square is the evidence left behind of where the sign hung for almost 50 years. 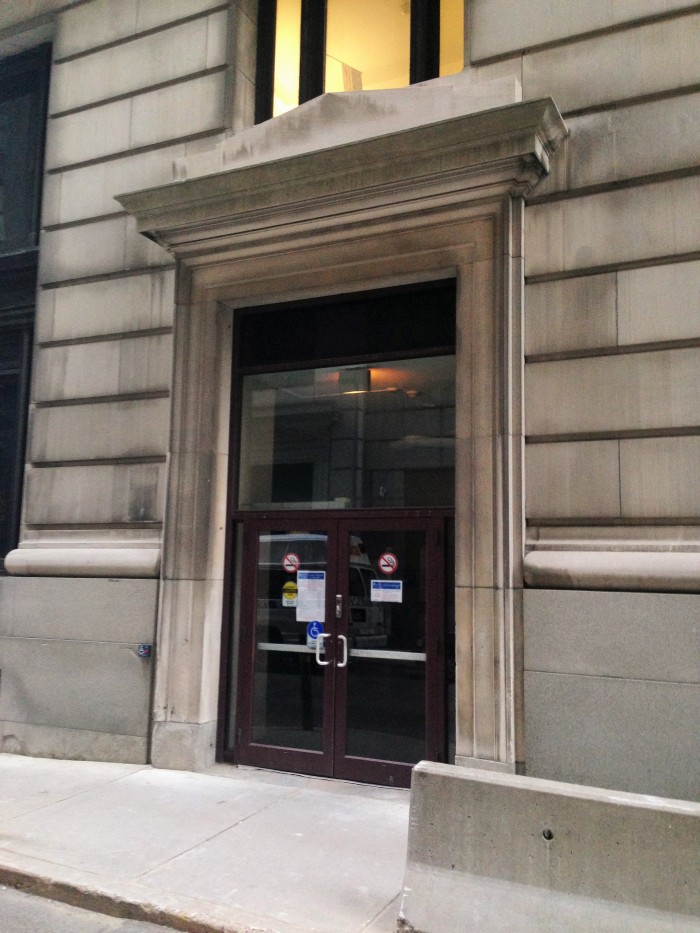 The headquarters building for the Boston Public Schools is located on Court Street in Boston. The side entrances for the building exit onto Court Square, which is a U-shaped street that runs around and behind the building. This is where two Fallout Shelter signs once hung (one next to each entrance). These were removed several years ago, but the shadows are easily seen today. 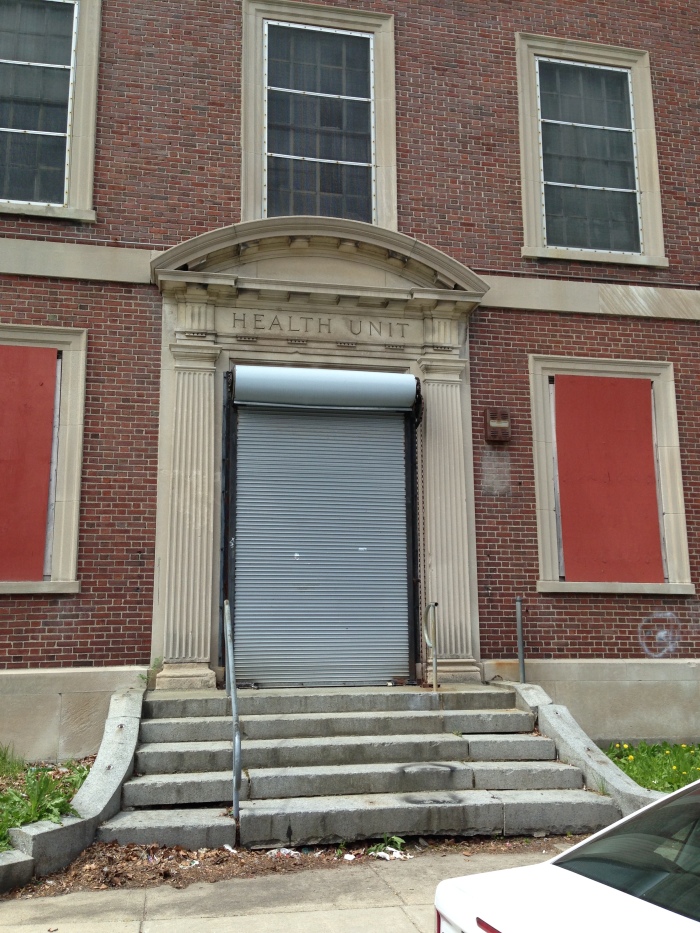 At this now shuttered George Robert White Fund Health Center on Whittier Street in Roxbury, an exterior Fallout Shelter sign hung until at least August 2013. After it was removed, this dusty square was left over to the right of the door in the picture (the August 2013 date was verified through Google Street View). Many other former George Robert White Health buildings were also shelters, including those in Charlestown and Dorchester. 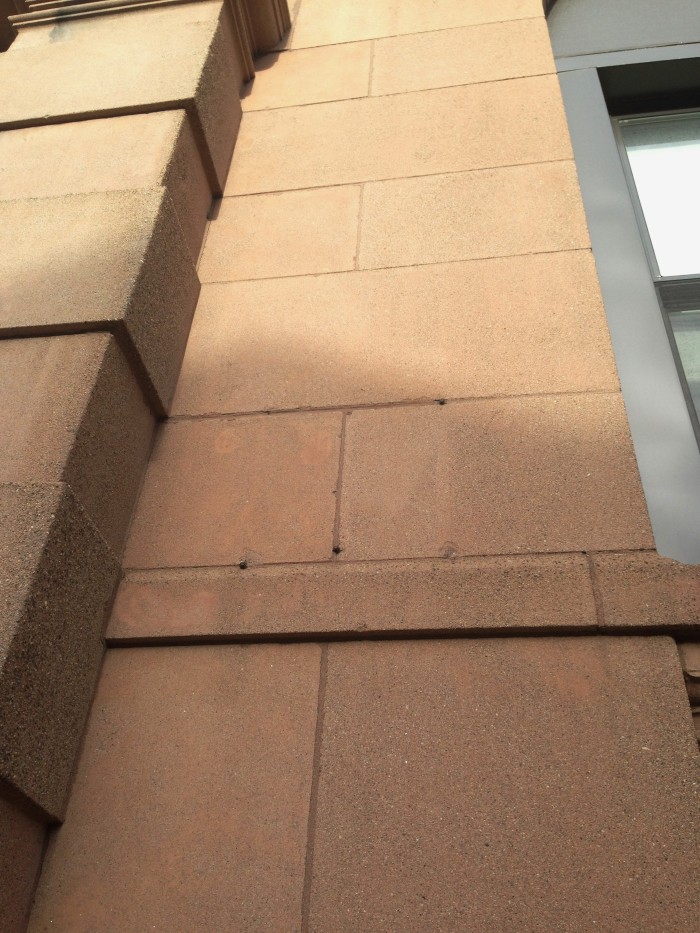 Although a bit harder to see than some of the others, this shadow and the nail holes are on the side of one of the buildings that make up the Marion Manor complex in South Boston. This particular shadow is next to what used to be an entrance on Old Harbor Street near Thomas Park. 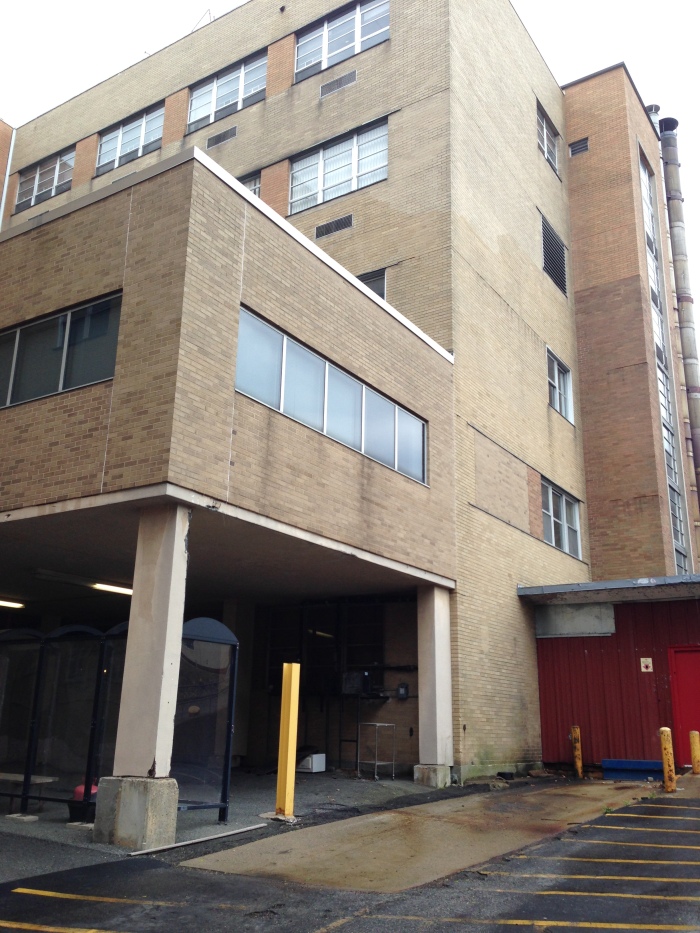 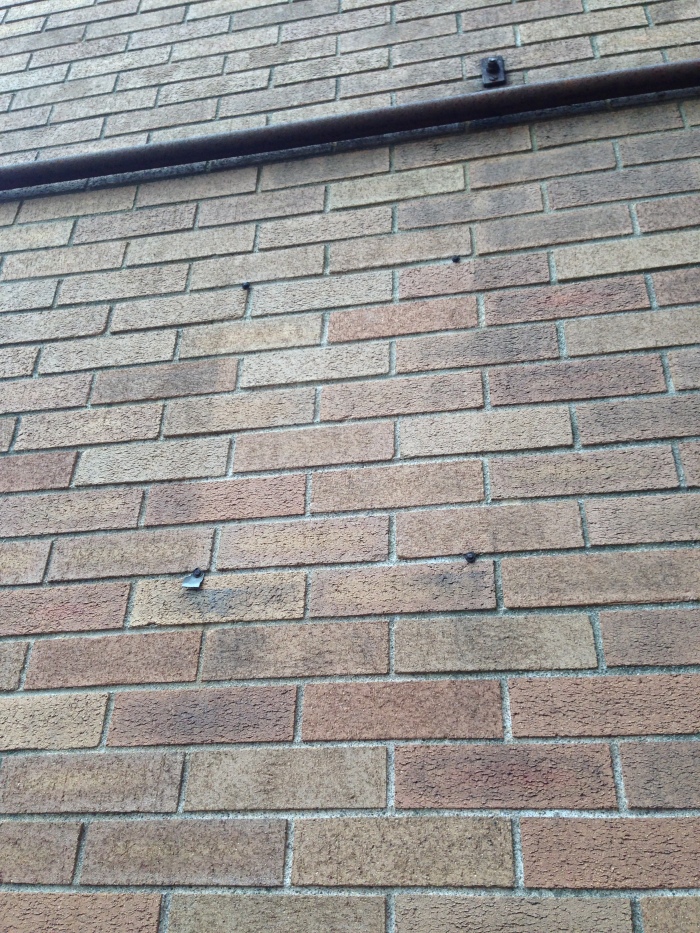 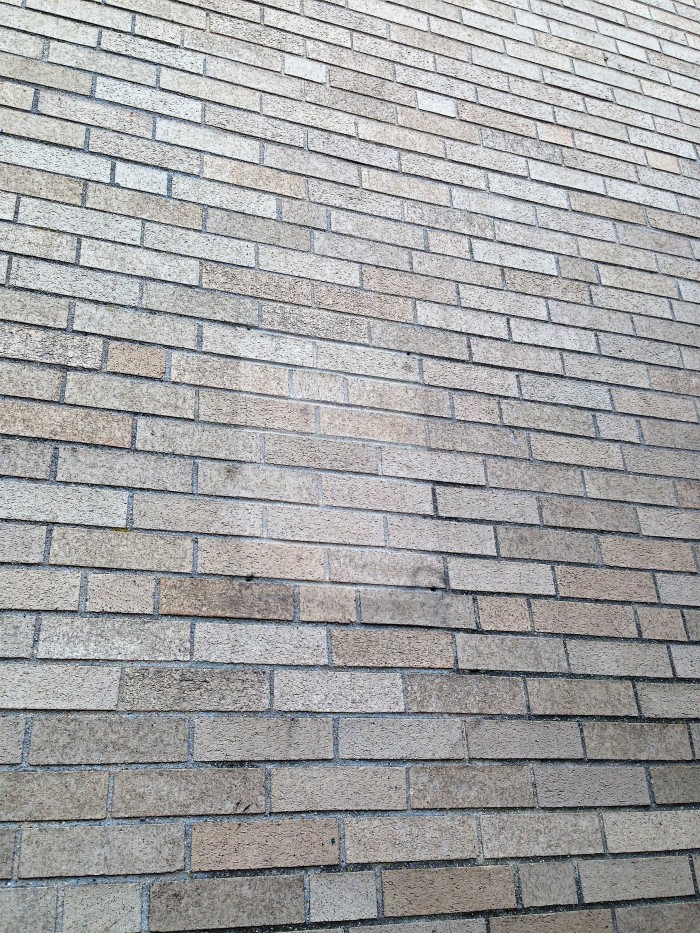 The Jewish Memorial Hospital in Roxbury operated until 2005, when it was bought by Radius Health, which then operated a rehabilitation center until it too closed in 2014.

There were at least 2 exterior sign shadows in the rear of the hospital and although there was one exterior sign in the front, no shadow was present.

On the day of the visit, two maintenance workers who were on site maintaining the closed building were asked about Fallout Shelter signs, and one stated that he himself removed the interior ones several years prior, and no more existed. He did not know when the exterior signs were removed. 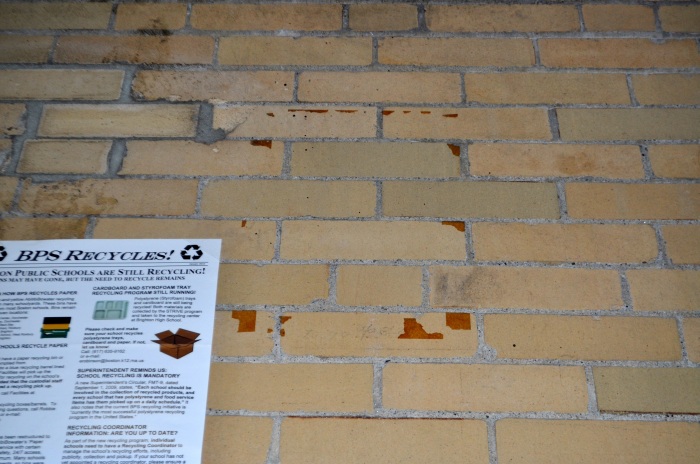 In this case, it was likely a square of tape that was put behind the sign, some of which remained when it was removed. 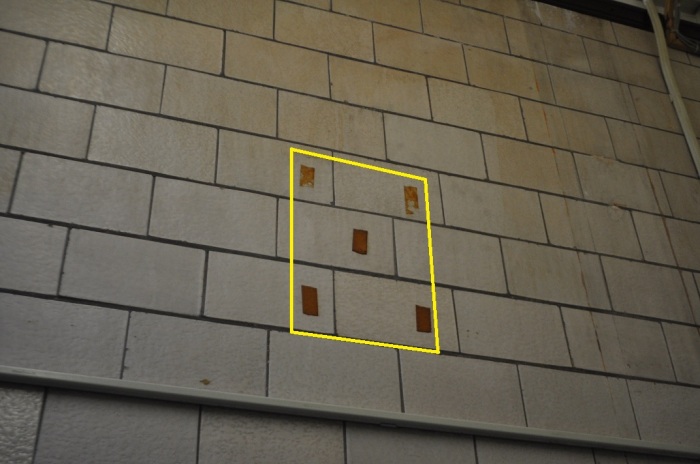 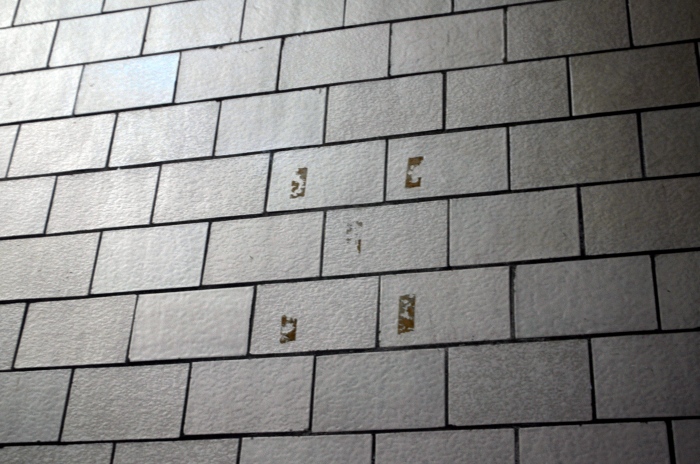 When this school was visited, only one interior Fallout Shelter sign hung in a first floor hallway. However, sign shadows were seen in the stairwells on the first floor. To show where and how the sign would have hung, a yellow outline was placed over one of the shadows.

Although pictures aren’t up for all of them, sign shadows/marks can also be observed at many other locations in Boston.

This page and the accompanying pictures were included because as time goes on, more and more signs will be taken down, but this might be a way to identify where one used to hang, or explain what used to be where these marks or shadows are.